I think everyone loves the sweet scent of peonies. Their delicate petals and pastel colours are one of spring’s special gifts.

These pretty peonies are by Marcella Hawley of Power Poppy. Just as a note, I’m not, in any way, affiliated with Power Poppy or Marcella Hawley, I just thought I’d include the link so you can visit her site and browse through the beautiful floral digis.

I really enjoyed making this birthday card for my dear friend, Julie. As always, I coloured it with my Copic markers and then added shine and dimension to the cups with 3-D Crystal Lacquer. I tried to capture it on the striped mug, but I just couldn’t get the right lighting. I think you can see the shine and 3-D effect quite clearly on the polka dot tea cup. Isn’t it pretty?

I hope my Pretty Peony card inspires you to create a sweet floral card for your someone special.

Thanks, so much for stopping by. I hope you will drop in again, soon.

I just put up my last post over at Just Some Lines, and thought I would post it here, too. So, here goes…

Welcome back to the “Spring Cleaning” challenge at Just Some Lines.

Yep, it’s time to go through your stash and use some of those forgotten bits and pieces to create your personal masterpiece. Try to use stuff that is at least six months old. It surprising how many “treasures” are hidden away in those scrap boxes.

I decided to make an easel card–my new favourite card format–because it  just seemed perfect for Rudis and Jehanne’s pretty flower frame. As you can see, Rudis appears to be perched on the edge of the frame. That’s because he’s a .png file–which means the image shows, but the background is transparent. This lets you layer images to create depth, or even a little scene.

This picture shows the easel card opened up…isn’t it cute the way it stands up?

I coloured Rudis with my Copics, because I LOVE my Copics. Next, I decided to add a shadow around him, but wasn’t happy with the effect. So I started just dabbing and dotting all over the background until it was completely covered. I liked the effect and decided to go with it. I’m going to try that technique, again, maybe to add texture or create depth.

Digging madly through embellishment stash, I found a little strip of fencing, made of real wood. It seemed to just jump onto my card! I wanted to be sure that it stayed on, so I used some kind of glue in a tube that was so stinky I had to open a window! I then added some tiny pink flowers that I got on sale last year at Michael’s.

So, there was Rudis, perched happily in his flower frame. What was he thinking? He was thinking…”Helloooo, Spring!” And isn’t that just what we’re all thinking?

This picture shows the easel card opened up even further, so you can see the little message inside. Personally, when it’s on display, I like to leave it open just to the fence.

Thanks, so much, for taking time to read my post. I hope you will drop by, again, soon!

Meet Keisha, a pretty little fairy, perched daintily on a branch. She is another of the lovely digis created by Jehanne of Just Some Lines.
I just posted my bi-weekly (every second Thursday) article to Just Some Lines and thought I would let you know so  you could pop over there and see what’s new with the other “JSL Girls.”
<
Sometimes less is more!
This week, I created a CAS (Clean And Simple) card with “Keisha Watching.” Jehanne kept this image so clean and simple that I decided to create my card in the same spirit.
First, I coloured Keisha with Copics and then added some “fairy sparkle” to her wings. A bit of lace and ribbon; a few simple flowers and she was complete. Sometimes, less is definitely more!

I continued the theme on all four  panels of my card. Have a peek at the inside… 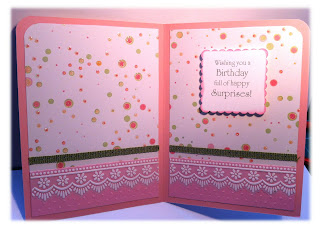 When we wake up, tomorrow morning, we will be saying, “TGIF!.” Have a fantastic Friday and happy weekend!
Thanks, so much, for dropping in.
Big hugs!
Gloria

“Sigh…love is the best,” says Rudis. And he continues his declaration of love inside the card with, “And you are the bestest!”

I created this cute couple by using the digi, Rudis…Auggh, drawn by Jehanne from Just Some Lines.

I duplicated Rudis and flipped the duplicate image over to face in the opposite direction. By using PNG files, it is possible to layer images, as I have done here with the two love-sick pups.

I have some terrific designer paper called, The Pet Stack. I chose this really fun paper to keep the theme light-hearted.

As I have been doing with all my cards this year (and will do, forever more) I finished the insides and the back with the same great paper.

Just look at these two happy pups by Jehanne of Just Some Lines. Could they BE more in love? Now that I’m on the Just Some Lines Design Team–lovingly known as the “JSL Girls”–I get to work with Jehanne’s wonderful digital images all the time. In fact, I will be posting at least one a week here at Globug Ideas. You can also find my design work on my Pinterest Site and in the Crafter’s Digital Art Centre Gallery.

(Scroll down to see the inside and back views)

I began by creating a duplicate of the image and resizing it just a bit smaller than the original, to create a guy and a girl.

Next, I flipped her over so she would be looking in his direction. Well, they looked so contented, together, that the words, “forget the roses, let’s rub noses,” popped right into my head.

I used my scalloped circle die cutter in my Cuttlebug to create the backdrop and then used pop-dots to mount it on designer paper. I coloured around the love-sick pups and the edge of the scalloped circle with my Copic markers. A sparkly heart and, “Bob’s you uncle,” or, as I always say, “in my case, Bob’s my brother!”

Uh-oh, sparkles are flying all over the place, as these two sweeties rub noses!

to see more of my hand-crafted